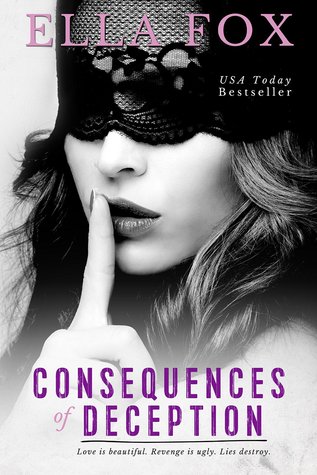 Once upon a time, girl met boy and a love story began.

Their future was assured until tragedy struck and deceptions were made.

There are consequences to every action, and the Consequences of Deception are always the most punishing.

Sloane Evans lost nearly everyone that she’s ever loved, but losing Killian Brandt left a scar that never healed.

Four and a half years after turning his back on her, Killian steps back into Sloane’s life in the most shocking of ways, giving her no choice but to abandon her life and go with him.

Why would a man buy a woman that he hates?

Not everything is as it appears.

Love is beautiful, revenge is ugly, and lies destroy lives.

Prepare to discover the Consequences of Deception.

As I go by GR ratings, 2 stars mean “it was ok” and that is exactly my feelings towards the book. This review is really long and on top of that, it doesn’t have a single gif or pic in it so bear with me.
************************************************
What a fitting title. Indeed, this story details the results of lies and a deception that nearly destroys Killian and Sloane’s love. I was initially very intrigued by said “deception” and tragedy that split this couple apart, and when I read this sentence:
“Why would a man buy a woman that he hates?”
Well, I was sold. Good for you for reeling me in the author!